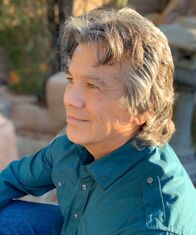 Ronald Holt began his spiritual training as a teenager in northern California when he devoted himself to a committed practice of Wing Chun Kung Fu. This gave him the foundation of a steady mind, focused thought, and the ability to sense subtle flows of energy. In the late 1970s, as a young man in his early 20s, he began his practice of meditation, even through his tour of duty on an aircraft carrier in the US Navy. Once honorably discharged, he moved to New Mexico (USA) and began a serious study of esoteric spirituality, studying under a teacher and channel outside of Albuquerque.

Throughout his life he has always received inspiration and information, but when he was younger he didn’t know how to use it. During the 1980s, he began to receive information regarding the ancient science of sacred geometry – most especially utilizing the wisdom of the platonic solid called the octahedron. His explorations into sacred geometry continued and in the early 1990s he began teaching workshops based on sacred geometry and meditation. He also traveled extensively to sacred sites in the American southwest and Hawaii, and let nature and his inner inspirations teach him what he needed to know for the future.

At this time, he was also working as a marine and field archaeologist for the prestigious Bishop Museum of Honolulu – with projects that took him to all of the Hawaiian Islands and the Marianas Islands (Rota, Guam, Saipan, and Tinian). In this work, he had the great opportunity to work with the Hawaiian medicine people called kahunas, which furthered his education and practice of indigenous spirituality.

From 1997-2013, Ron served as director of Flower of Life Research, an organization that spread the teachings of sacred geometry and meditation worldwide. He had the responsibility to teach other teachers, develop new programs, and continue teaching his original workshops that uniquely combine meditation, martial arts principles, sacred geometry, and the wisdom of the Earth into profound experiential seminars that are life-changing for participants.

Ron is also a certified teacher of Taoist yoga (Korean Sundoh style), and has trained in Hatha yoga at the master educational level (500 hours). Since his teenage years he has utilized the training he has had in various forms of Kung Fu. Today, he combines his training in the internal martial arts, meditation, sacred geometry, and archaeology with his unique methods to work with opening the human heart. His workshops (sometimes together with wife Lyssa Royal Holt) are inspiring, life-changing, and totally unique. By nature he is a private person who does not feel comfortable “going public”, but his many students continually ask for more. Ron’s workshops tangibly help connect the student to their own source of Divine energy so that they can truly feel their connection to the universe and apply that wisdom to everyday life in an easy, practical way.

Ron can most recently be seen on Reuben Langdon's series, Interview with E.D. (ExtraDimensionals), season 3. Seasons 1 and 2 were shown on Gaia TV and at present, season 3 (and Ron's 2 episodes) can be seen on Vimeo. Read more about them here.

"I experienced Ron Holt's teachings for the first time. It was what I was needing in my life. I had asked for a direction and I got it. Grateful!"
--R.G., USA

"Ron has a storytelling style in his teaching that naturally opens up new areas and new directions for one's personal growth. I find that his openness and ability to assimilate ideas and emotions of others provides a fertile space where the spark of inspiration often emerges and leads to the sudden understanding of expansive ideas that can normally take months or even years to click."
--M.W., Hong Kong

This work will definitely change your life - be prepared for it never to be the same again in a very positive and uplifting way!
-- B.R., England

Ron is one of those people you instantly like when you meet him. Ron goes out of his way to do things right. He is well grounded in integrity and with his own psychic and spiritual gifts.  Ron is the personification of the saying: "Still water runs deep." - very deep.
--W.P., USA

Ron's work and teaching brings concepts like sacred geometry "down to earth" so you can understand it and apply it in your life to heal challenges and grow.  Both Lyssa and Ron bring such compassion and understanding when they teach that one feels heard, valued, and inspired to make the necessary changes in your life so that you can create a reality of joy, peace and balance for yourself despite what may be transpiring around you. Ron and his wife Lyssa are gifted teachers and healers and we are so very lucky to have them to assist us in navigating through the transition happening on the planet today!
-- J.P. USA

A trained archaeologist, Ron Holt is able to meld the perceptions of a shaman with the intellectual rigor of a scientist. A gifted teacher, he brings the best of both worlds to the study of sacred geometric forms, the building blocks of consciousness through which the light of the soul casts its shadows on the cave wall of our everyday existence.
--B.G., USA

Back to About Us Page

©2013-2022 by Seed of Life Institute LLC. All Rights Reserved
When quoting from or using any written material obtained from this site, please clearly state the source, with a link to the page.
Photographs are not allowed to be used without written permission from Seed of Life Institute.
General Web Site design and some graphics by Yvette Báez
​Find us on Facebook at the Lyssa Royal Group Page